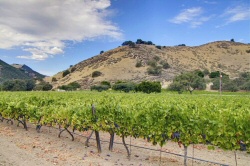 Located on a beautiful upland promontory at the junction of three major watersheds, Mesa Del Sol has been a favorite location for more than a century.

One small stone building, a water house, and a portion of one of our cabins date back to the 1800's and are believed to have been a stage stop for travelers headed overaland to Carmel Valley or up the Arroyo Seco River to the Mission San Antonio.

Around the turn of the century, a health center with various small cabins was developed. The hot dry pure air of the Arroyo Seco Highlands became a soothing setting for those with tuberculosis and other maladies. Teddy Roosevelt was a visitor and stayed here during that time!

In 1927, California Senator Fred Weybret purchased the property and moved his family here. The main house was constructed in 1936 out of local redwood and Carmel stone. The Senator and his family lived here until his death in 1945 and the land passed on to a noted Monterey County lettuce baron from Salinas, Steve Rianda, and his talented artist wife, Mary.

With their three children, the Rianda family lived on the property, named it Mesa Del Sol, and went on to beautify the mesa, adding a pool and other out buildings and cultivating the grounds and gardens over the next 25 years.

In 1998 another Salinas-born agricultural innovator Jake Hougham, purchased the land. The vineyards were planted and the trout pond was reinstalled at that time.
Since Jake Hougham's death in 2000, his wife Ann has continued to restore the 14 acre vineyard estate and produce award-winning grapes for many celebrated Monterey County vintners. The estate buildings have been lovingly restored, the grounds beautifully landscaped and crops now include fragrant Provence Lavender used in sachets, lotions and oils.